I've never made a terrine before and thought it was about time I learned how. Here's our first attempt at what we affectionately call "Meat Jello". 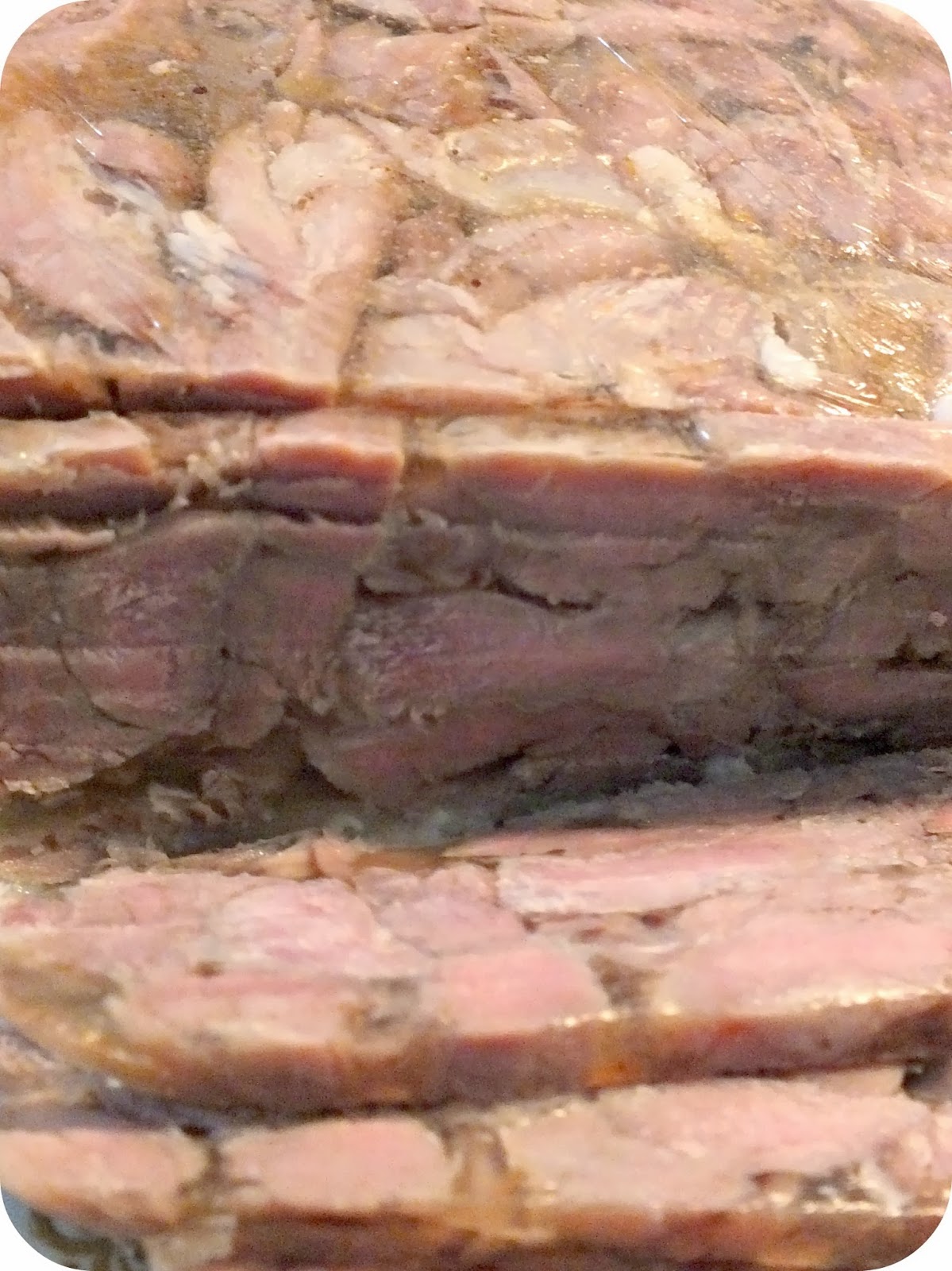 It really is pretty delicious and very simple to make. It costs pennies a serving too. Pretty economical for a snacky lunchy platter. I think it's going to be something we experiment with in the future. 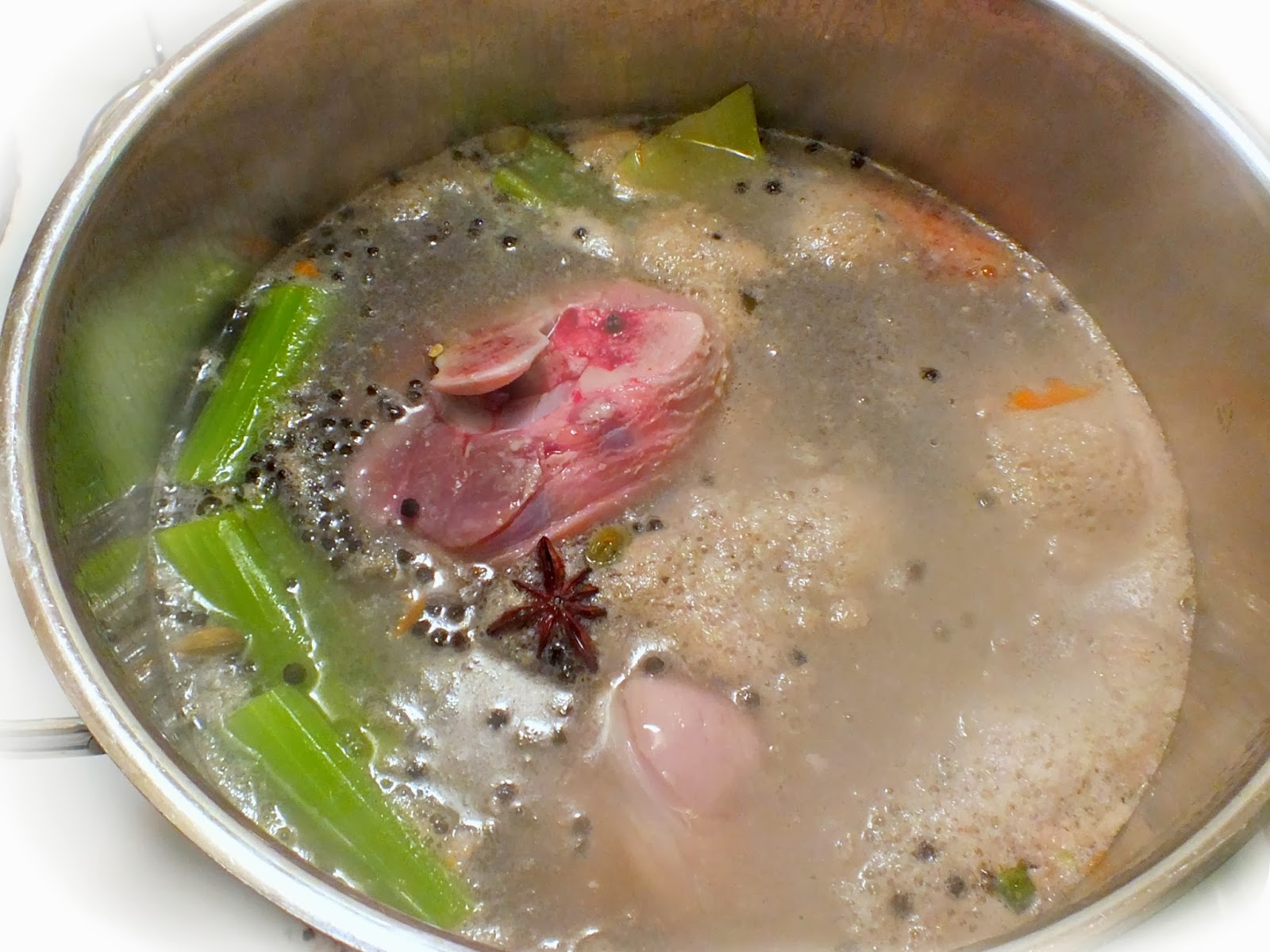 I got four ham hocks on sale. They were between 2 and 3 dollars each and they were pretty meaty things. Not too much bone and fat. I added them to a stock pot and tossed in a carrot and two stalks of celery. I spiced it up a bit by plunking in some star anise, cardamom pods and peppercorns. I covered the whole thing with cold water and covered that with a slightly ajar lid. I boiled the whole works for four hours. 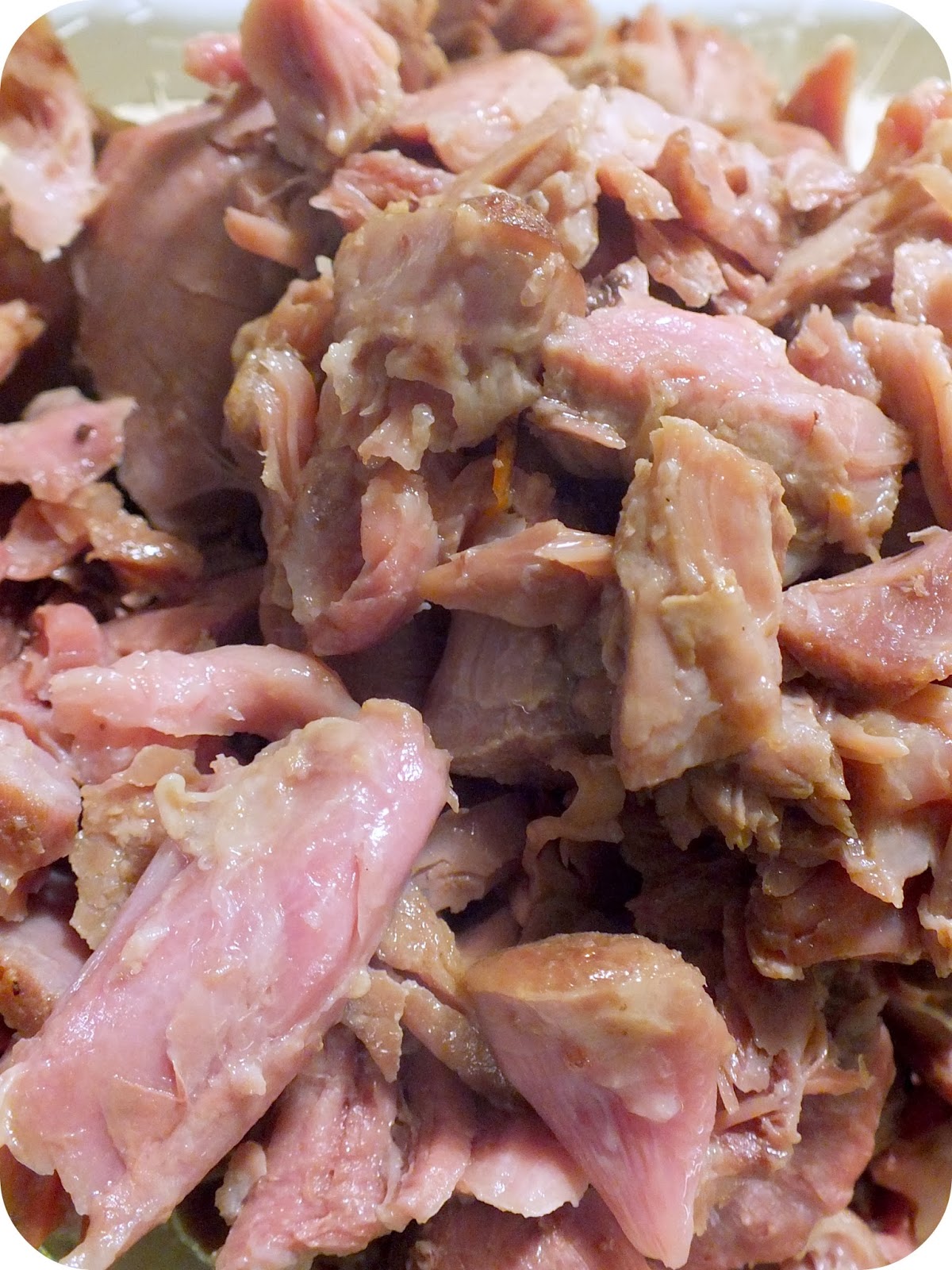 When the meat fell off the bone I knew it was time to pull things apart. I set the meat aside to cool and dis-guarded the veg and spices. After the meat cooled down I chopped it into bite sized pieces. 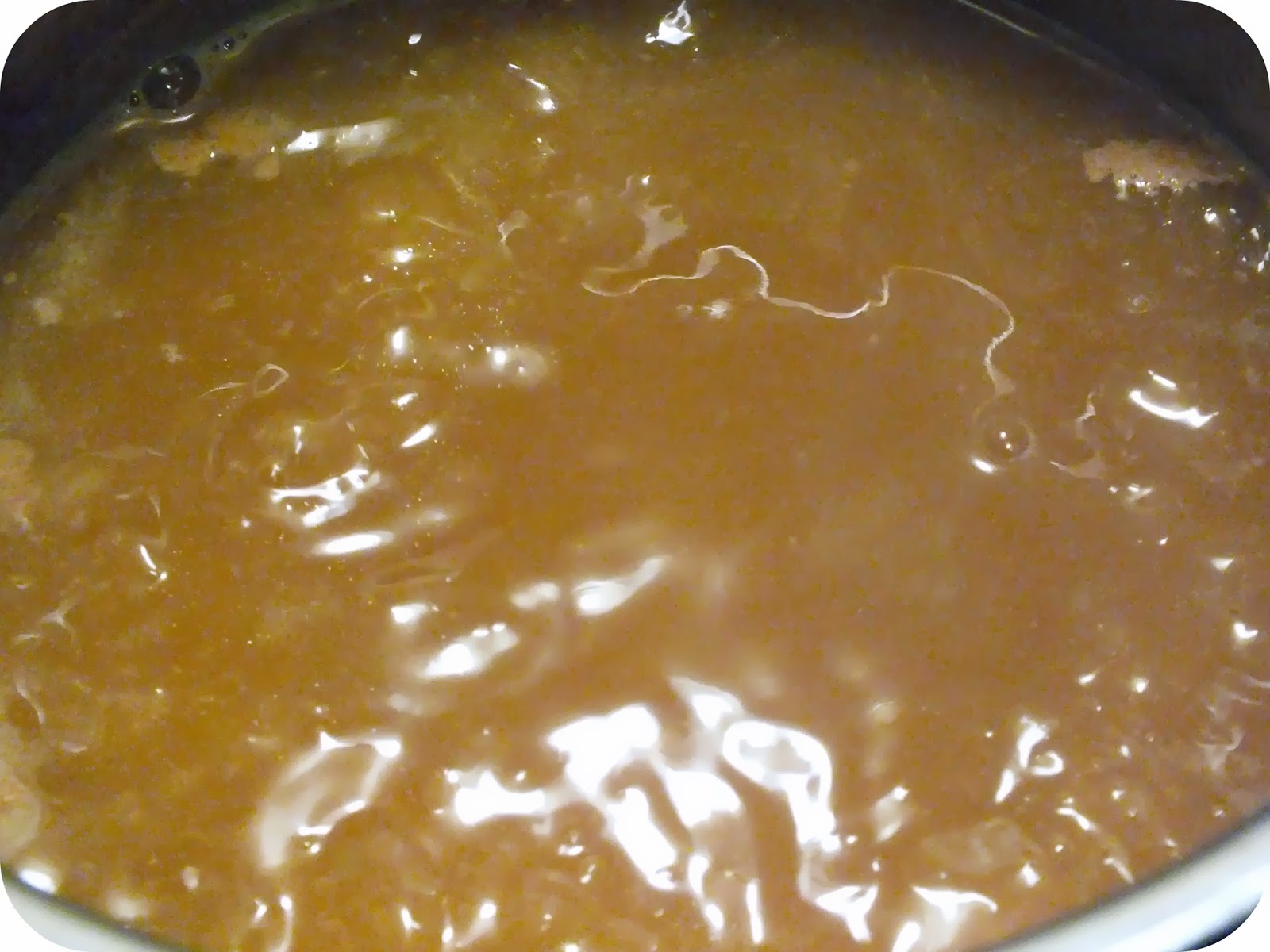 I kept boiling the cooking liquid until it was reduced by half. I tasted it to make sure it wasn't too salty. I was a little worried about the salt levels when the liquid was warm. It was way salty. But I forged ahead and kept building. I wanted to see what was going to happen. 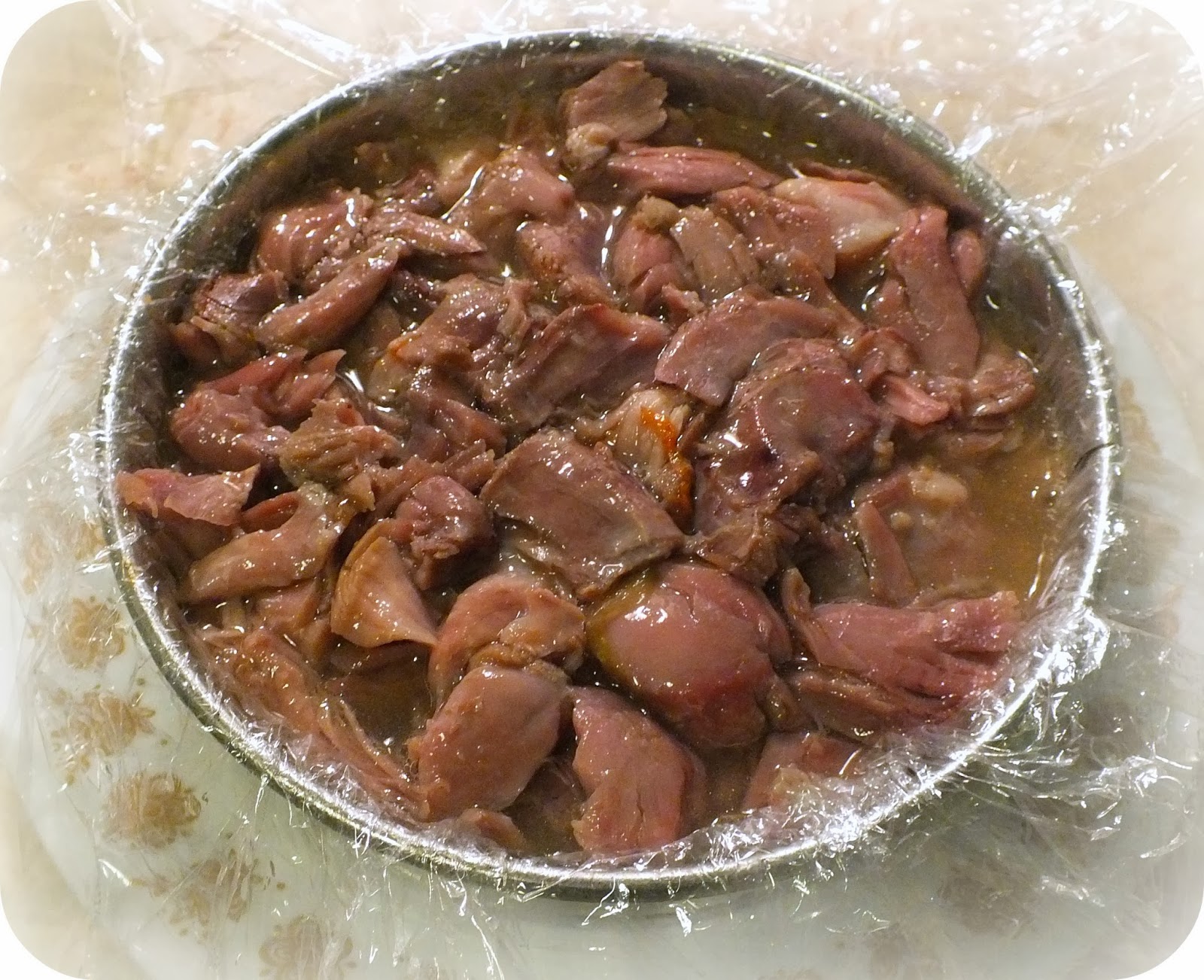 I lined my mold (a smallish spring form cake pan) with three layers of plastic wrap and made sure to have enough overlap to cover the filled mold. I arranged the cut pieces of pork in the mold and then poured the reduced liquid over the whole works. I covered the thing with plastic wrap and put a teeny plate over the top. I weighed the plate down with a giant can of kidney beans and set the whole thing in the fridge overnight.

It worked a treat and I needn't have worried about the salt levels. We ate it cool and the flavors of cool food seem to be not a strong as warm food. Next time (because of a suggestion from the eldest daughter) I'll be adding pistachios and herbs. I'm looking forward to it!