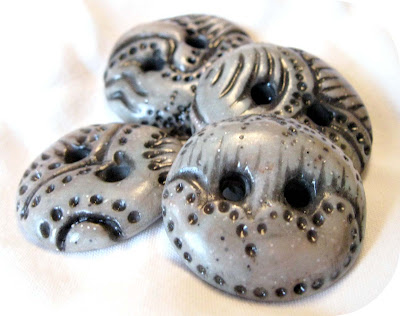 These button are so much fun to make. I really wanted to be able to use up some of the clay I have in the studio left over from old projects. I also really loved the idea of making my own buttons for my knitting projects. These look organic, almost like they're made from stone or bone. They were fun to make and only took a few minutes per button. They are addicting though and I spent almost two days playing with the process.

Here's how I did it.

To make these buttons you will need: This is the project the left over clay came from. There is little wood canes and some turquoise and stone clay mixed. To see this project and the instructions for creating it. Grab a copy of PolymerCafe June 2011. Any clay colours that you like together will work. Try to match a knit project or use up some old clay and see what you come up with. Try to limit to no more than three or four colours. 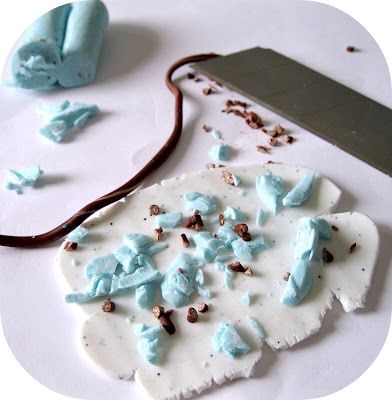 I rolled out a light colour clay to a 1/4 cm thick sheet. Here I used Fimo effects 003 marble and some Fimo soft 39 peppermint that was previously mixed with marble to lighten it and a cane made from Fimo soft 7 caramel and 70 sahara. I cut up the clay into small shards and sprinkled them over the light coloured sheet. 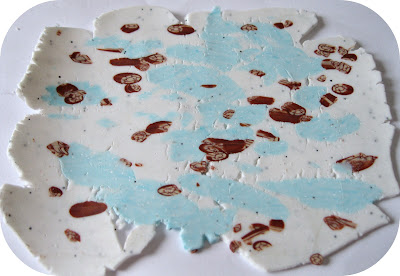 I rolled this out in the pasta machine on the largest setting to blend it. 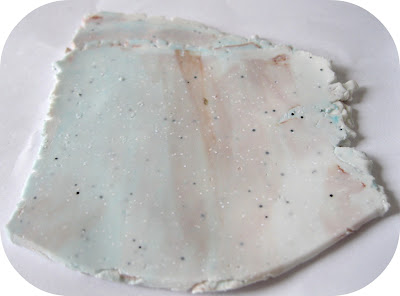 This is what it looks like after it had been folded and sent through the pasta machine five or six more times. 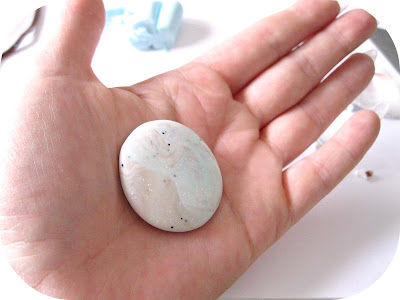 I tore off a piece of the almost blended clay and rolled it into a ball. I flattened the ball out with the palm of my hand against the table and shaped it by rolling it gently in my flattened palms until I liked the shape. 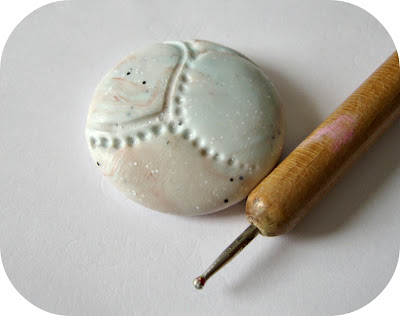 I picked a side to work on for the top of the button and started to make designs following the patterns in the clay colours. I used a stylus tool but a pencil or knitting needle tip would both be great tools here. 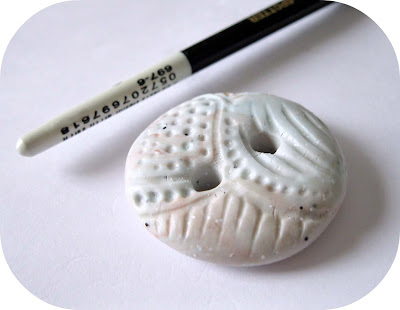 I kept adding lines and dots until I thought I was done. Then I used the end of a paint brush to push holes through the button. I pushed down through to the table, turned the button and remade the holes from the back to clean them up a bit. 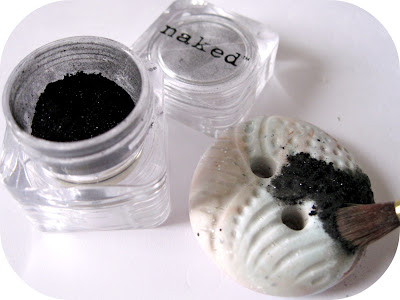 I brushed some pigment powder in a shimmery black into the buttons surface with a soft brush. I dusted off the excess powder and baked the buttons for 15 minutes at 230 degrees F. Let the buttons cool off before the next step. 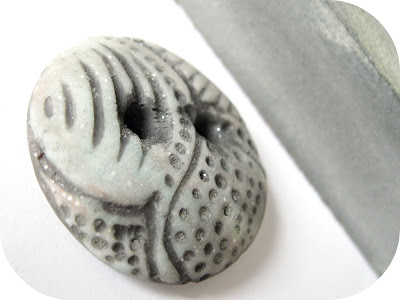 I used a medium grit sponge block nail file to sand the entire surface of the buttons. This sanding removed coloured powder from the high points of the buttons texture but left the colour in the grooves. It made them look old instantly. It was like finding treasure or being an archaeologist and discovering a specimen no one had ever seen before...... ok..... maybe I'm overstating. But it was very cool to see what happened when your design finally emerges. This would be a fun craft to do with little kids....... I might have to borrow some. 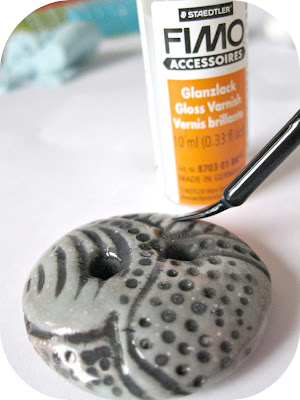 I finished the buttons off by adding a nice even coat of Fimo gloss varnish and letting it dry before coating the other side. I can't wait to add these to some of my knitting projects.
2 comments:
Email ThisBlogThis!Share to TwitterShare to FacebookShare to Pinterest
This post may contain: FIMO, polymer clay, STAEDTLER, tutorial, yarn crafts
Newer Posts Older Posts Home
Subscribe to: Posts (Atom)