So... about three weeks ago I got a belly ache. It was different than any other belly ache I've ever had.... EVER! It felt like someone had transported a spike covered bowling ball under my ribs and was trying to pull it out through my sternum. I (being a big strong girlie) simply waited. Figuring I had gas or acid reflux or something I took some tums and walked the floor all night. Sitting or lying down wasn't happening. I had consumed a beautiful blue steak with potatoes and veg for supper and washed it down with some crunchy wasabi nuts, delicious!
So it was reasonable for me to believe I had heartburn. I don't know what heartburn feels like either by the way, I have been blessed up to now with a cast iron stomach.

Eventually it went away but I still had the heavy weird feeling under my ribs, like my food was just sitting there undigested for hours. I went to work, did all the usual things for the next week and then BAM! it was back.

I went to work anyway. It was a big day with supervisors and what not coming in, I felt I had to be there. I stayed for a half hour and then drove myself to the hospital. They did all kinds of tests hooked me up to monitors and gave me morphine through a drip to ease the pain and relax me and an ultrasound. After four and a half hours at the hospital, it stopped.

Turns out I have developed a gallstone!
If I had of went to the hospital in the first 72 hours of it happening, they could have removed my gallbladder through a little hole like pulling a chicken tenderloin through a McDonalds drinking straw, because I waited, my gallbladder now resembles a roast that has been cooking for three days. No way that's fitting through a straw!

Now I'm on a very restrictive diet, NO FAT!!! They're trying to calm down my gallbladder so they can pull it through that small hole they want to make. If they can't calm it down it means a seven day hospital stay or removal through a very LARGE incision.

If you hurt, GO TO THE HOSPITAL!!!!
don't wait
just go see a Doctor. 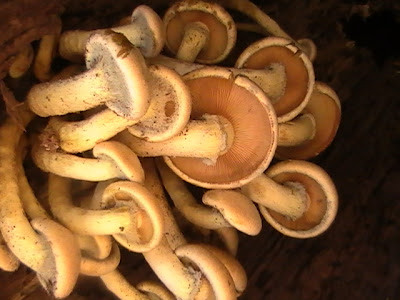 This is a picture of the inside of the tree they cut down in our yard. I know how it feels poor tree, to have things growing inside you.