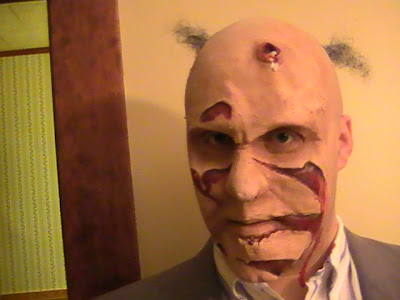 This is the prosthetic we built for Mr. Jimmy (My other half) two Halloweens ago.
We kind of overdo the Halloween thing around here. It's our holiday. I'm going to try to find as many pictures of the build as I can and load them up with explanations as I find them. 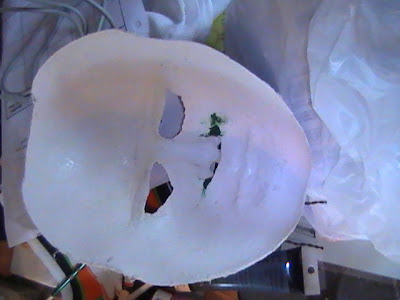 The first thing you need to do is make a cast of the future Zombie's face. We used plaster bandages, warm water and loads of Vaseline. Didn't want to rip out those thick and luscious eyebrows, and that's exactly what will happen if you put plaster over unprotected hair. Mr. Jimmy shaves his head so we didn't have to worry about protecting his hairline, but if you have hair protect it! You have been warned.
We put three good layers of plaster bandage on his face and left the nose and eyes open so he could breathe and so he could see what I was doing to him. (He doesn't trust me.... Weird huh?)
Make sure to reasure your model constantly that they are safe. Make them comfortable.
Let the plaster set for 15 or twenty minutes then when it starts to harden up get them to wiggle their face a bit to loosen the mold. It should pull off fairly easily if you have applied sufficient vaseline. Let them remove it slowly as they see fit. No pulling the band aid off quickly here. It's just not the nice thing to do.

We used masking tape to seal up the eye and nose holes on the (Lets call it the face negative.... 'cause that's what it is) face negative after it had cured completely. Then we used plasticine to seal it and smooth out any joint lines around the tape. We used a big soft brush to smear a thin layer of Vaseline into the face negative to act as a release agent. Make sure the layer is thin enough for any detail to show. you don't want to distort it now it will throw off the fit of the prosthetic.

We mixed up a bunch of plaster of paris and filled the face negative up and let it set overnight. The next morning we pulled off the negative and revealed (Lets call this the face positive....... 'cause it's a positive representation of his face.) the face positive. 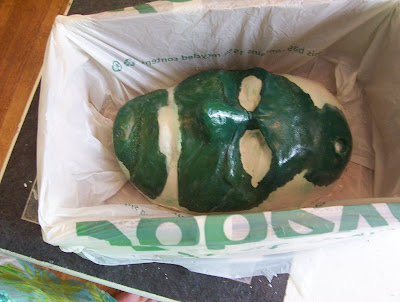 This is the plasticine sculpt we did. We sculpted it on the positive cast of his face.
Only sculpt out the parts you want to alter. Full face prosthetics are cool but we weren't going for that look here. We just wanted to alter him a bit. Add wounds and rotting. General purification. 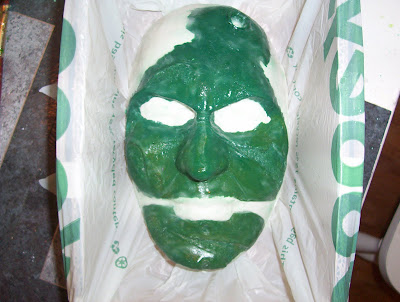 We set the sculpted on face into a bag lined box that is a little bit bigger than the face.
We made sure to seal around the bottom of the face with plasticine so it was air tight and no plaster would seep underneath when we poured the next step.
Cover the whole thing in a thin layer of Vaseline using a nice big soft brush. Really important here not to wreck the detail. It's pretty easy to fill it all in with Vaseline. pay attention and use a q-tip or toothpick to clean any built up areas out.
Mix up more plaster and fill the box up with it. Bang the box on the table a few times to get rid of any air bubbles that may be clinging to the plasticine. You can also brush the first layer of plaster over the sculpt pushing it into the recesses to eliminate any air bubbles, then pour in the rest to fill the box. Let it set up overnight. 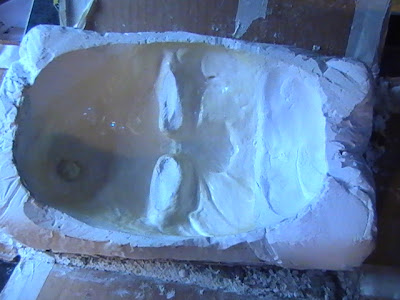 This is what you get when you take the sculpt out of the new mold. (We'll call it the prosthetic mold I guess.)
You want to spread some thin layers of liquid latex into the spots you sculpted. No need for any release agents, it should come out fine without it. Make several thin layers of latex letting it dry completely in between layers. After five or six layers we added some single layers of torn up toilet paper to give the prosthetic some strength. We did about twenty layers of latex and two layers of toilet paper. It took about two days to layer and dry. Oh yeah.... make sure to keep the edges thin, move the edges of each layer in so the prosthetic won't be thick and noticeable. 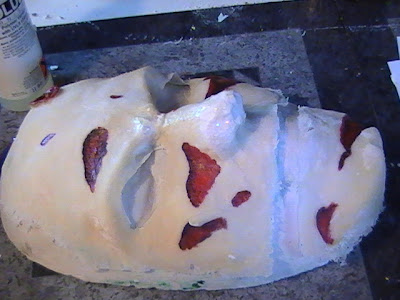 After the prosthetic has dried, peel it gently out of the mold. Lay it onto the face positive (all the plasticine has been removed from the sculpting process, so it's Mr. Jimmy again.) so it will keep it's shape. We used acrylic paint and regular dollar store makeup to colour this prosthetic. 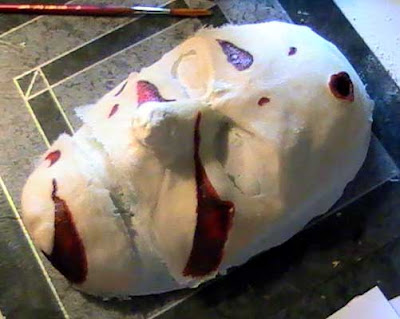 We tried to make the wounds look wet but we didn't want them to smudge. We used a varnish on top of the red. Next time I'll use glaze, I think it will be more flexible. The varnish cracked a bit after wearing it. 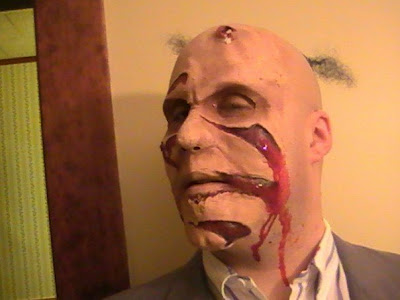 This is the final piece on Mr. Jimmy. It turned out pretty well we think. Well worth the time and effort to produce it. We learned allot throughout the process. Can't wait for the next prosthetic appliance build. 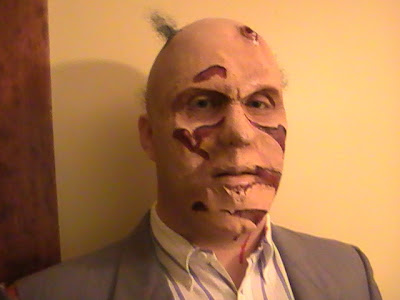 Mr. Jimmy again from the other side. 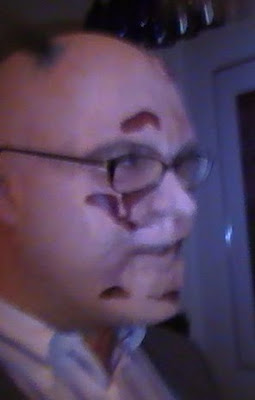 What? Zombies totally wear nerd glasses. How else would they be able to see the delicious BRAINZ!!!! 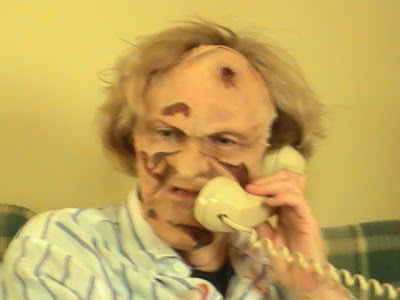 This is my beautiful Mom wearing the same appliance. It fit her a bit big, Mr. Jimmy has a HUGE head, but she still managed to scare the crap out of a bunch of folks. 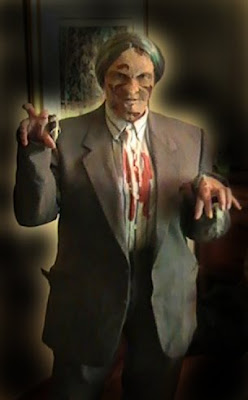