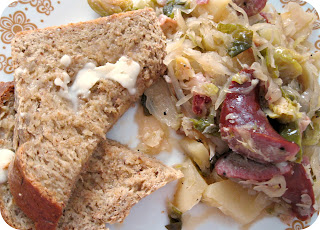 It's been a good week for food around here. A coworker has been telling me to get my butt to Krug's butcher shop in Tavistock for ages. I finally went this week...... I will definitely be going back often!

So far we've had their London broil.... a pinwheel of beef with a stuffing of another meat.... pork I think. It was fabulous! Portions were pretty big was the only negative I could muster. We broiled them and had them with a deep rich beef and mushroom gravy over mashed.

The next night we had their smoked pork chops! The whole house smelled of rich smokey bacon and the flavour was so mellow and delicious. These guys are going to be a family favorite. We had them with mashed, and a veg medley of beet roots, Brussels sprouts, carrot, and pineapple.

Today we had the smoked sausage. Again it was delicious...... We are all becoming huge fans. 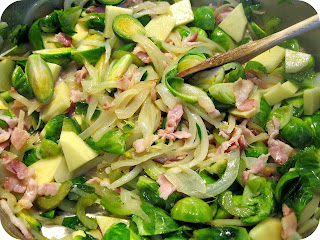 In a deep oven safe frying pan that has a lid, saute the bacon and onions in the oil and butter until cooked through. Add the Brussels sprouts and potato bits and stir together. 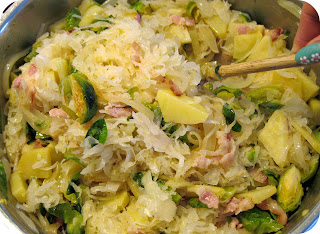 drain and rinse the sour kraut and add it to the pan with a bit of water. Stir everything well and make sure to get the good bits from the bottom stirred through. 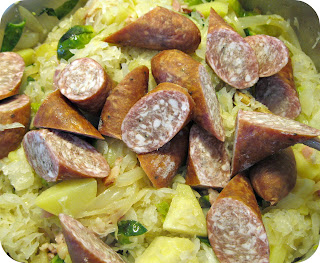 Chop the smoked sausage up into bite sized pieces, add them to the pot and stir them in. Pop the lid on and put the whole thing into a 375 F oven for about a half an hour. 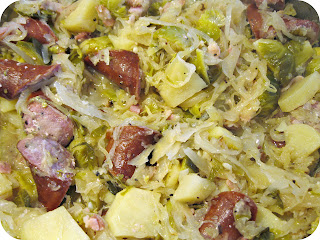 This is what it looked like when I pulled it out of the oven and peeked in. I left it on top of the stove with the lid on to settle for fifteen minutes so we wouldn't have our mouths burnt. It was HOT!!!!

I served it with some of our fresh  homemade bread still warm from the oven.

For those of you who are local enough to go see these folks.... Do It!!!!
Ask for the candy sausage!!! 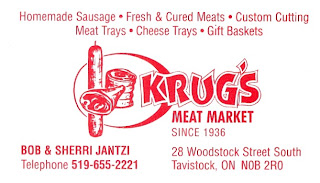