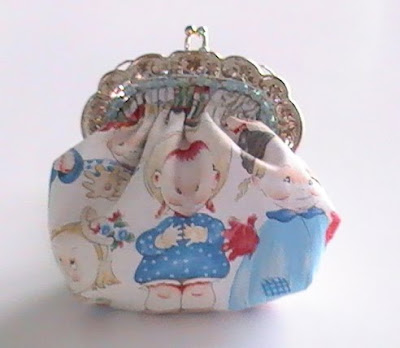 Week 7 already!
Needed to clean out the purse.
I think I may have spring cleaning fever.
(I'll have to take something for that!)
Decided it was time to replace my coin purse with a new one. Here are the results. 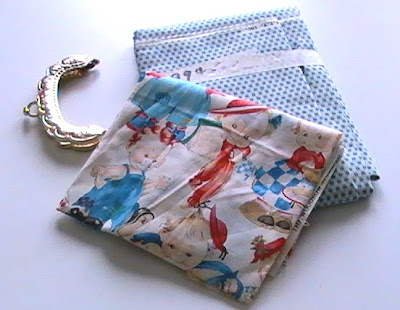 Scraps of pretty fabric (I used some thrift store finds)
A kiss close purse finding.
(Also from an old thrift store find, but they are available new if you look hard)
(A zipper will work as a closure too)
Matching thread
Paper for a pattern
Pencil or marker
Scissors
Elastic thread,
(for gathering quickly, you load it on the bobbin on your sewing machine by hand)
Pins
Hand sewing needle 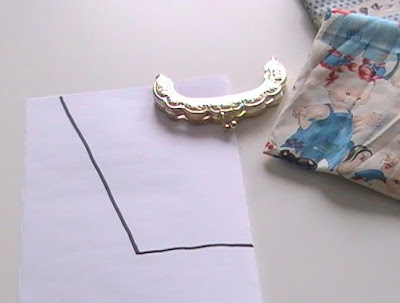 The top of the bag will be one and a half times the width of the purse clasp
(or zipper if you prefer)
Make the purse as long as you'd like and add an inch to compensate for seams. The Bottom of the purse should be about the same width as the purse closure with an inch for seam allowance.
I made my pattern on a folded sheet of paper and drew half of it out. Place the folded side in the center and when you unfold it after cutting you will have a whole pattern that is pretty symmetrical. 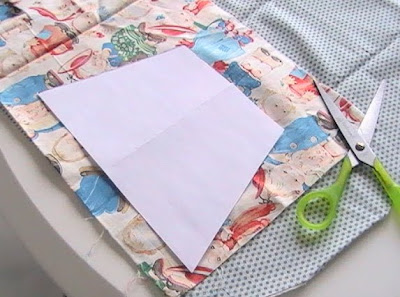 You will need two pieces cut for the outside of the purse and two for the inside. Make sure you pick a nice part of the fabric if you have a large pattern match. Also make sure the pattern is the right way up, top of the pattern at the top of the purse pattern. The long edge is the top. 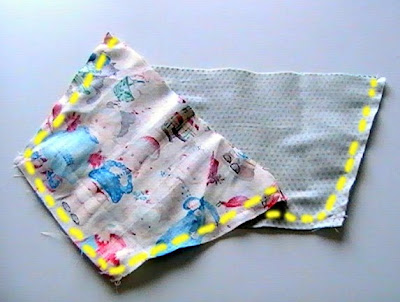 Once the pieces are cut out, put the purse outside pieces and lining pieces right sides together and sew around all the short edges using a quarter inch seam allowance. 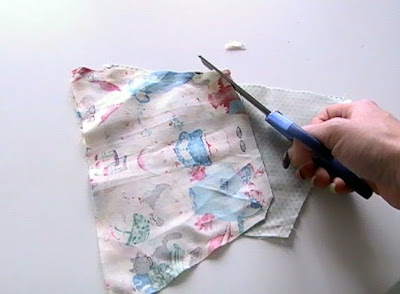 Trim off the corners so they are easier to turn. 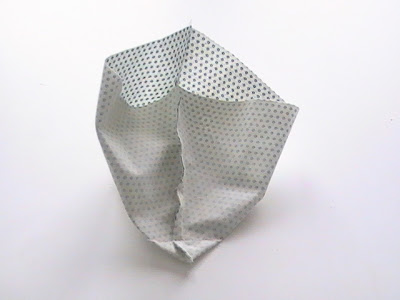 Flatten the seams together on the corners so they look like this and then sew across the flattened bit about one inch from the corner. 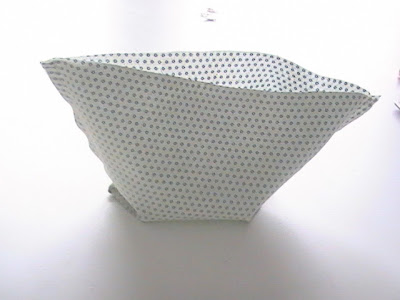 Do the same for the other side and the purse outside piece. It will look like this now. 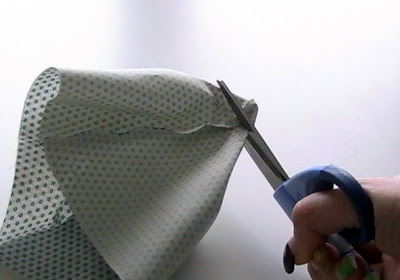 Trim off the little corner pieces leaving the new seam. 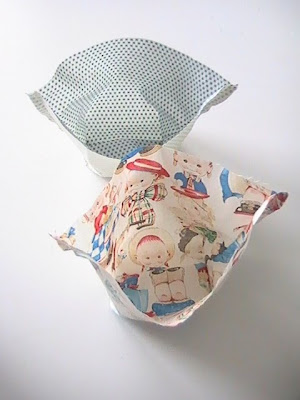 This is what we have now, two pieces ready to put together. 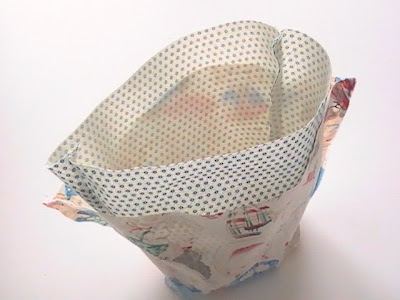 Flip the lining piece so it is right side out and slip it into the purse outside piece. The two pieces should line up right sides together. 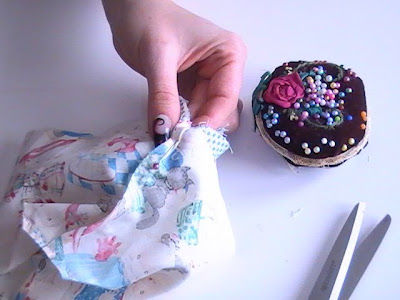 Pin the seams together and put a few pins along the edge to hold things while you sew. 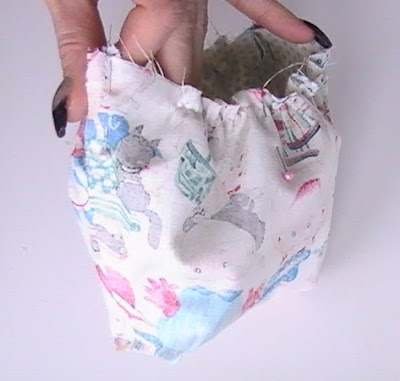 Load the bobbin with elastic thread and sew a seam one quarter inch from the edge, starting and stopping the seam one inch from each side seam. Don't forget to reinforce the stitches by sewing over the start and ending of the seam a few times. 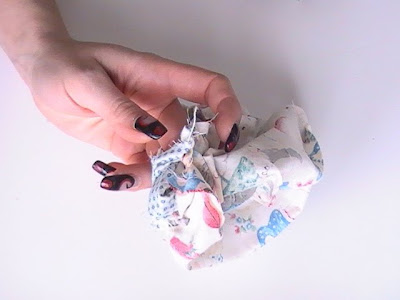 Flip the whole thing right side out through one of the openings by the side seams. 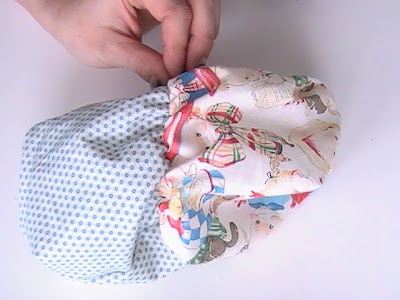 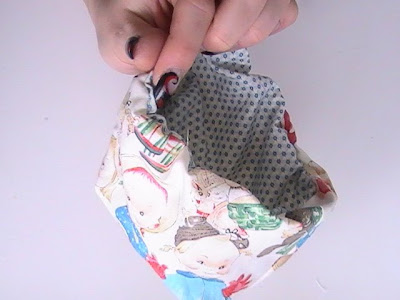 Push the lining into the purse outside so the seam between the two becomes the purse top. 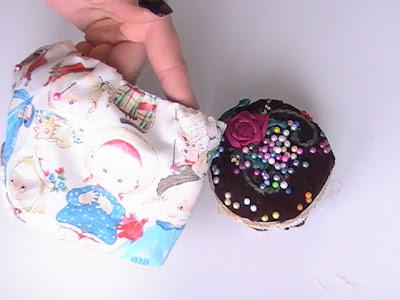 Pin along the purse top to hold the seam at the edge. 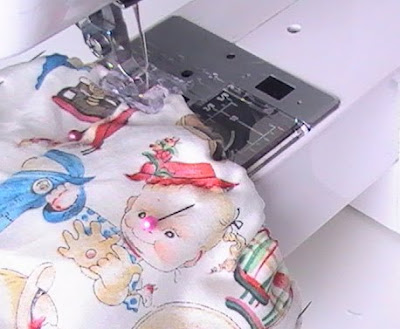 Sew again using the elastic bobbin thread, one quarter inch from the edge. Sew all the way around reinforcing the thread ends by sewing over them a few times. I leave the pins in while I sew, most people don't. Once and a while I'll hit a pin with the needle and break it but it doesn't happen very often. 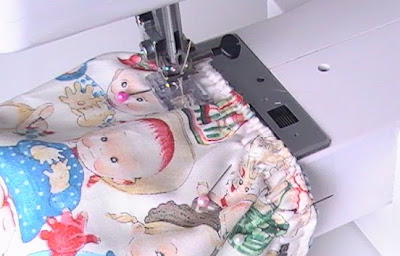 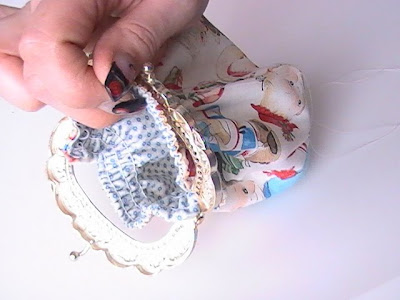 Hand stitch the purse clasp to the top of the purse opening. My clasp has sewing holes to attach the fabric but some are glued on. We have a finished edge so the glue on method will work well too. Start in the middle front and make sure it's even all the way around. (If you want to use a zipper instead go ahead and add it now.) 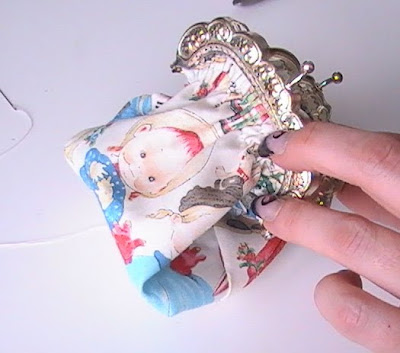 It's looking pretty good already. We could call it done now but I think it needs a bit of embellishing, don't you?

There all done now.
I added some little blue faceted plastic beads around the edge of the clasp on both sides.
Now I just have to find some change to fill it up.